There are many beautiful mountain lakes in Tajikistan. While the Karakul Lake in the Eastern Pamir is considered the largest lake in Tajikistan and the deepest one is the Sarez Lake in the western part of the Pamir Mountains, the most beautiful lake of the country is indubitably the Iskanderkul.

Iskandarkul
The Iskanderkul is located in the delightful Fan Mountains. The lake has numerous stories, legends and traditions that residents passed from mouth to mouth. The story goes that the beauty of this miracle nature captivated even Alexander III of Macedon during a military campaign to Central Asia. That is why the lake is named after him — Iskander (Alexander). From the lake, the Iskander Darya rough river flows that forms unusually beautiful and majestic waterfall called the «Fan Niagara» falling from a height of 38 meters. 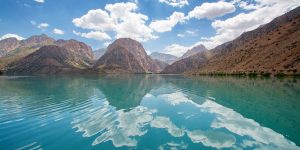 Karakul
Karokul is located at an altitude of 3900 m above the sea level near the village of Karakul in the Murghab district of Tajikistan. It is 100 meters above the famous alpine Titicaca Lake in the Andes. Bitter-salty water of Karakul remains cold for most of the year. When the weather is calm the lake water is clear, but in a strong wind, the waves are coming, and the color of water takes on a black hue, which gave the name of the lake. The Lakeshore is surrounded by high mountains on three sides, and only on the east side, it goes to a small picturesque valley. 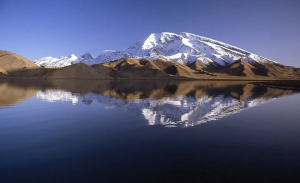 Sarez
The Sarez Lake emerged in 1911 as a result of the unique geological phenomenon: after a powerful earthquake, the Murghab River was blocked by a rock mass with a volume of 2.2 km3, which led to the formation of the dam. Over the next ten years, the water level in the lake has stabilized. The volume of water in the lake is 17 km3, the length of the lake is 70 km, and the depth is over 500 m. The Sky-blue water surrounded by a ring of steep red and brown-red coastal cliffs and fjords, the pristine wild nature makes travelling to the region unforgettable. 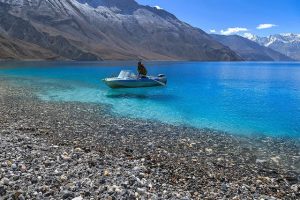 Kulikalon lakes
You can get to the beautiful Kulikalon lakes through Alaudin mountain pass, which takes one day the way there. Beautiful walls consisting of high mountains of Mirali (5120 m), Maria (4970 m) and Adamtash (4700 m) surround Kulikalon lakes. Kulikalon lakes are famous for the fact that cast all colors of the rainbow. This is an extraordinary sight! 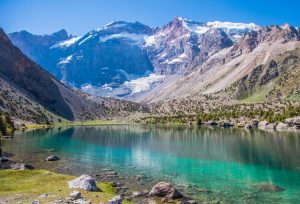 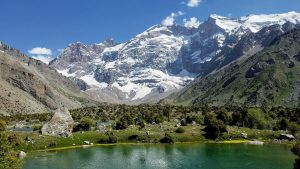 Bahri Tojik reservoir
Artificial pearl of Tajikistan (such lyrical name is given to the reservoir) has emerged as a result of the construction of hydroelectric power station on the Syr Darya River. The length of the lake is 75 km. The area is more than 4 million sq. m. The location is the North part of the Republic of Tajikistan, near the city of Khujand. Bahri Tojik is surrounded by blossoming mountain landscape.
Numerous of comfortable hotels are stretched along Bahri Tojik, indicating the development of tourism infrastructure here.
Bahri Tojik is well-known for its sandy beaches, which stretch along the coast. Number of beach cafes, lounges, boat trips are there to serve tourists. For all those wishing to take a tour, guides will conduct tours to the ancient monuments and oriental bazaars. In Bahri Tojik there are lots of different species of fish breeding. People come here to fish from around the country. 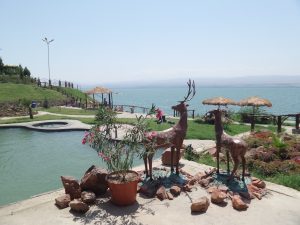 Nurek reservoir
Nurek reservoir is a genuine delight for visitors. Sailing on a boat on the reservoir it is impossible not to admire the indescribable beauty of the mountain landscape in the midst of which a great miracle — a huge reservoir is formed, which has more than 70 km in length and area of 98 km2.
The lake is very popular among tourists as it created large areas for entertaining trips on boats. The middle of the lake is also a great place for viewing the beautiful panorama of the vast gorge, surrounded by snowy peaks on all sides. There are no sandy beaches, due to the fact that it is not a natural lake and rocky slopes down directly to the water. However, in many places along the coast of the reservoir floating houses are moored, from which it is convenient to go down to the water for swimming. 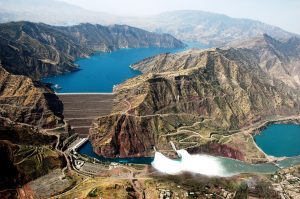 Sari Khosor Waterfall
From a height of 50 meters, the cascade of Sari Khosor waterfalls crashes down, scattering around him millions of splashes shimmering on the sun with all colors of the rainbow.
The waterfall is located in the Vakhsh mountain range in the upstream of the river Surkhob, approximately at the height of 1500 meters above the sea level. This is one of the most beautiful waterfalls of Tajikistan. 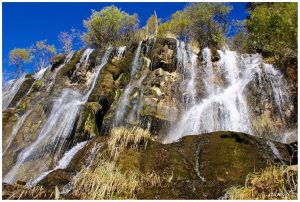