Dushanbe is the capital of Tajikistan, a city of republican significance, the largest scientific, cultural, political, economic, industrial and administrative center of the country.

“Monday” is the translation of the name of ancient Dushanbe the capital of Tajikistan. At the beginning of the 17th century at the crossroads of Asian roads, a village was formed, where a market was held on Mondays. Time passed, the village grew and soon turned into a regional center, the noisy markets were in full of people and goods, not only one day a week – but the name remained. The first written mention of Dushanbe occurs at the end of 1676.

Modern Dushanbe is a city in which one can feel the breath of the fabulous East, and at the same time it is the cultural, economic and political center of the country. During the years of independence, Dushanbe has literally changed. Over the past 30 years, architecturally remarkable buildings of the National Library, the National Museum of Tajikistan, the cultural complex “Kokhi Navruz”, “Kokhi Somon”, “Dushanbe Plaza” and a number of other objects have been built in Dushanbe, which have become the pride of the residents of the capital.

Guests of the capital can visit various museums, parks, theaters and see other sights of the city.

This is the largest complex in Central Asia, which has no analogues and is recognized as a modern touristic miracle. The “Kokhi Navruz” Palace consists of 12 halls, each of which reflects the unique features of national architecture. The patterns and elements of its decorative culture represent the 6000-year history of the culture and civilization of the Tajik people.

The National Museum of Tajikistan was founded on 27 July 2011. Its area is 24,000 m2, of which 15,000 m2 are dedicated to exhibitions. The museum has 22 exhibition halls, where the best masterpieces of ancestors are exhibited, representing the history and civilization of the Tajik people, including a Hellenistic figurine from Takhti-Sangin, III-IV centuries. BC, clay panel – Kafir-Kala, VII century AD.

A research department has been established at the museum, where the departments of written heritage are located, as well as the exposition departments of nature, antiquity and the Middle Ages, modern and recent history, fine and applied arts.

The park is located in the central part of Dushanbe. The layout of the park includes the Flagstaff, an artificial lake with a fountain, wide rectangular alleys with a cascade of fountains, small architectural forms, and sculptures depicting the historical heroes of the Tajik people.

Construction of the flagpole began on 24 November 2010, on the National Flag Day, and the official opening took place on 30 August 2011. The flag of the Republic of Tajikistan is hoisted at a height of 165m and is one of the highest flags in the world. The flag is 30m wide and 60m long.

Program of visiting the sights of Dushanbe 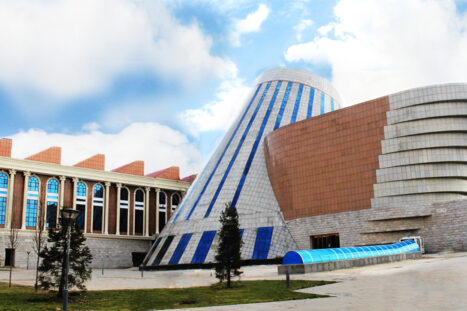 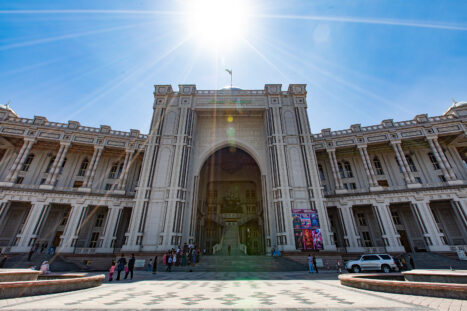 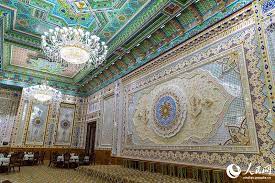 During the Civil War of 1918-1933, the fortress was almost completely destroyed. Partially restored in 1982 and restored in 2002.The fortress with walls 1 m thick, with loopholes for guns and cannons, towered on the slope of a high hill and was guarded by guards. Inside there was a swimming pool and a garden.

Opposite the fortress, there was a noisy market square with a caravanserai and many shops. Large staircases and terraces lined with brick led to the main entrance. Unfortunately, they have not survived to this day, as, indeed, the entire building of the palace. The only thing that remains of the fortress is a monumental gate made of burnt brick with two cylindrical towers, between which there is a pointed arch, so most of the gates of Bukhara were built in the XVIII-XIX centuries. But even this fragment looks very majestic and impressive today.At the end of the 80s of the XX century, a unique historical and cultural reserve was created in Hissar, including the Hissar fortress with an arch (2500 years old), the Registan (the square in front of the fortress), the Old Madrasah (XVI century), the New Madrasah, the Caravanserai (hotel), the Chashmai Mohien Mosque (VIII century), the Mosque “Sangin”, Mausoleum “Makhdumi Azam” (XVI century), a historical museum located in the building of the Old Madrasah.

There are unique monuments and exhibits (more than 3,200 copies) found during excavations on the territory of the city of Hissar and beyond.Near this tourist site, there are teahouses – national food outlets that serve national dishes and drinks, two of which guests will be able to visit during the tour.

Program of visiting the Hissar fortress 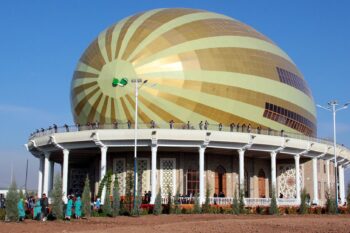 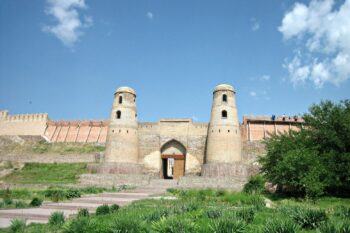 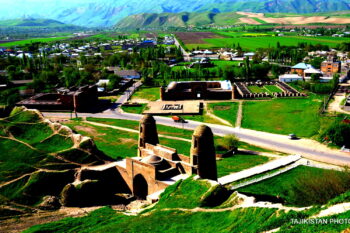 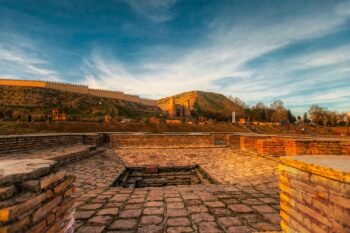 The Nurek city is located 70 km southeast of the capital – city of Dushanbe, on the banks of the Vakhsh River. Its area is 394.5 km2. The city was founded in 1960 on the site of the village of Nurek as a result of the construction of the Nurek hydroelectric power station. Modern Nurek is a beautiful calm city with beautiful nature, mountains, a mild climate, and clean fresh air.

Surrounded by mountains, the city of power engineers – Nurek is strikingly beautiful in the evening when numerous lights from the windows of houses in a moment illuminate the gorge between the mountains. The main pride of Nurek is the record holder of the Guinness Book of Records, the world’s tallest dam standing at the Nurek hydroelectric power station, one of the 30 most powerful hydroelectric power stations in the world.

The Nurek HPP on the Vakhsh River with an installed capacity of 3,000 MW (nine units of 335 MW each) and an average annual electricity generation of 11.2 billion kWh/year is the largest hydroelectric power station in Central Asia. The design of the hydroelectric power plant began in the 1950s, construction was started in 1961.

The construction of the station was announced by the All-Union Komsomol Shock Construction Site. The station was commissioned in 1972, the last unit was commissioned in 1979.The height of the dam of the station is 300 meters, which makes it the highest bulk dam in the world, the mirror area of the reservoir is 98 km2, the volume is 10.5 km3, and the length is about 70 km. Water from the reservoir is used not only to generate electricity but also sent through a special tunnel to irrigate agricultural land.

The Nurek HPP, providing about three-quarters of the country’s total electricity generation, is the flagship of Tajikistan’s energy industry. It is a unique source of green and environmentally friendly energy, which is also exported to neighbouring countries, making a worthy contribution to the efforts of the world community to develop a “green” economy.

The program of visiting the city of Nurek 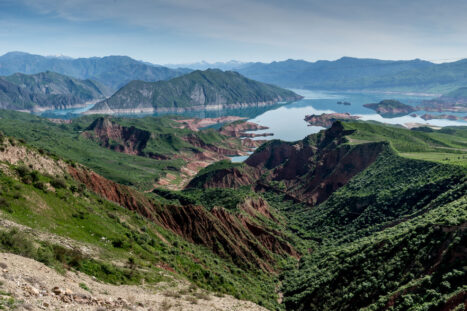 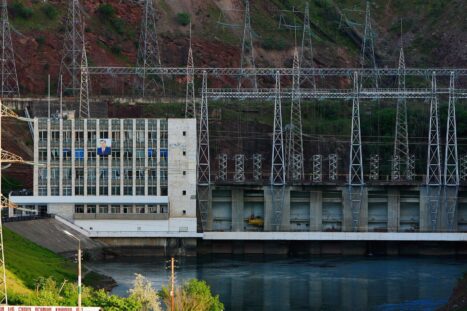 Varzob gorge is widely known for its unique weather, tourist opportunities and recreation areas. There are many holiday homes, tourist bases, roadside cafes and cottages. The gorge has a dozen side branches – small gorges, including Ovchug, Takob, and Siem. Varzob is beautiful and accessible at all times of the year. The main artery is the Varzob River, each tributary of which has its own gorges. There are thousands of springs, small streams and clean fresh air.Considering the beautiful and unique nature of the area, in 2000 the Government of the Republic of Tajikistan decided to declare Varzob a “Tourist zone”. On the territory of the district, there are shrines of Khoja Sanghok and Khoja Obi Garm, as well as several health, medical, tourist and entertainment places.

“The sanatorium “Khoja Obi Garm” is located at an altitude of 1740-1960 meters. The picturesque surroundings of the sanatorium consist of high mountains, where medicinal plants, trees and shrubs, hawthorns and sea buckthorn grow, and many birds live. There are many beautiful waterfalls in the gorge, as well as favorable conditions for recreation. In addition to the mountain climate, one of the main natural factors is warm mineral groundwater.

The resting complex “Kokhi Malika” is located in a picturesque corner of the Varzob gorge just 20 km from Dushanbe city. In the Kokhi Malika Complex, you can enjoy the beauties of Tajikistan’s nature, including the river, mountains and waterfall.The complex also provides good conditions for business meetings, seminars, holidays, banquets, and other events.

Program of visiting the sights of the Varzob
June 9, 2022 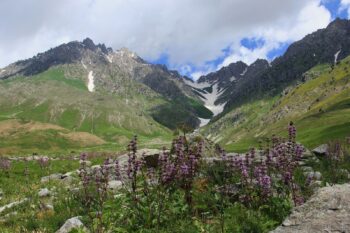 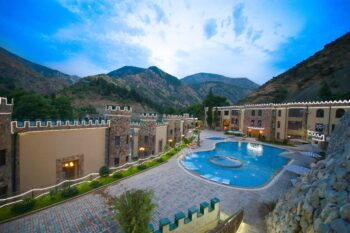 Rogun city is located in the eastern part of the Republic of Tajikistan on the banks of the Vakhsh River. The total area of ​​the city is 661 km2. The distance from Dushanbe to Rogun city is 110 km. It was founded in 1955 due to the construction of the Vakhsh cascade – several hydroelectric power plants on the Vakhsh River, which also includes the Rogun HPP.

The Rogun HPP is a hydroelectric power plant under construction on the Vakhsh River in Tajikistan, which is part of the Vakhsh cascade of HPPs, being its upper stage. According to the design, the Rogun HPP is a dam-type HPP with a high-rise (335 m) rockfill dam. Upon completion of the project, the hydroelectric dam will be the highest in the world.The design capacity of the HPP is 3600 MW, and the average annual output is 13.1 billion kWh. Six radial-axial hydraulic units with a capacity of 600 MW each will be installed in the HPP building. The HPP dam should form a large Rogun reservoir with a total volume of 13.3 km³ and a useful volume of 10.3 km³. The reservoir is planned to be used for both energy and irrigation purposes on arid lands with an area of ​​more than 300,000 hectares. This is a unique source of green and environmentally friendly energy, which is also exported to neighboring countries, making a worthy contribution to the efforts of the world community to develop a “green” economy. 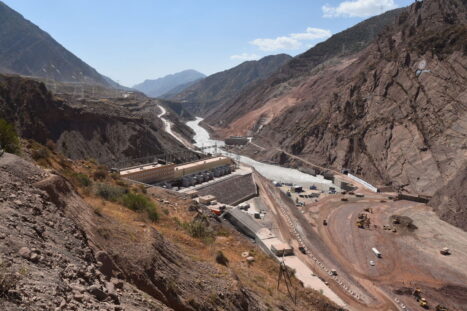 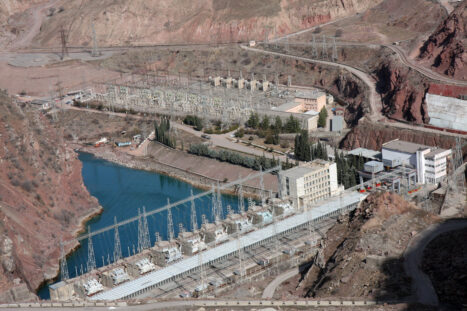