09.11.2022 All news
On 8 November 2022, the Water Pavilion hosted a session on “Bottom-Up Approaches to Building Resilience, Adaptive Capacity, and Financing in Water in the Asia and the Pacific”, which was organized by the Asian Development Bank together with other partners.
The meeting discussed financing needs and innovative approaches identified at the local level to address existing problems in the water sector and ensure water security.
The Special Envoy of the President of the Republic of Tajikistan for Water and Climate, Chairman of the Executive Committee of IFAS, Mr. Sulton Rahimzoda participated in this session.
In his presentation, he noted the financial gap and the many potential benefits of financing in the water sector. Particular focus was placed on the UN 2023 Water Conference, in which Tajikistan and the Kingdom of the Netherlands are co-chairs.
In particular, the participants were informed about the results of the recent preparatory meeting of the President of the UN General Assembly, in which the 5 themes of Interactive Dialogues of the Conference were finalized. It was emphasized that financing is a cross-cutting issue for all of these Interactive Dialogues.
Given that the Conference will be based on the principles of inclusiveness, intersectoral, and action orientation, one of its important outcomes will be the Water Action Agenda, it should stimulate and become a catalyst for a significant increase in funding and attract investment in the water sector.
The Water Agenda is a set of voluntary commitments to which stakeholders of all levels can join, ranging from individuals to large companies, financial institutions and UN Member States. An appeal was made to the participants of the meeting to join this initiative and make voluntary commitments, including financial ones.
It was noted with satisfaction that the goals and objectives of the UN 2023 Water Conference and the International Water Decade as a whole coincide with the goal of today’s meeting and they contribute to and complement each other. 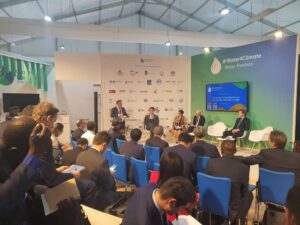 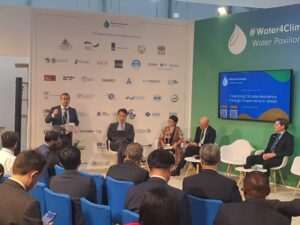 Opening of the National Pavilion of Tajikistan and Water Pavilion within COP 27
Press Conference of the Leaders of the Water and Climate Coalition
Contact us:
Phone: +992 (37) 227-68-43
E-mail: secretariat@dushanbewaterprocess.org