Participation in a TV and online show in Stockholm

01.09.2022 All news
On 31 August 2022 on the sidelines of the World Water Week in Stockholm, Sweden, the Special Envoy of the President of the Republic of Tajikistan on Water and Climate, Mr. Sulton Rahimzoda together with the Special Envoy of the Kingdom of the Netherlands for Water, Mr. Henk Ovink, as co-chairs, and Ms. Madhushree Chatterjee representative of the United Nations Department of Economic and Social Affairs (UNDESA) as secretariat were invited to attend the television show dedicated to the UN 2023 Water Conference.
This TV Show dedicated to the UN Water Conference 2023 with the participation of the presenter from the Royal Institute of Technology of Stockholm was called “The Road towards the UN 2023 Water Conference” and was aimed at educating viewers about the importance of the upcoming UN 2023 Water Conference, which is being held for the second time in the history of the UN and the first time in the last 50 years.
In the discussion they discussed the ways of implementation, actions taken, dreams, and vision of the Water Agenda of Action, proposed topics for interactive dialogues and engagement with stakeholders by the Co-Chairs and the Conference secretariat to make the 2023 path action-oriented, inclusive and inter-sectoral. 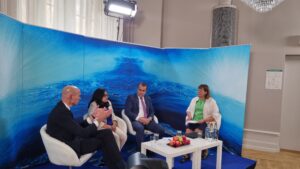 Participation in the High-Level Panel “Harnessing Global Development Agendas on Road to 2023”
Joint session of Tajikistan and the Netherlands in the framework of the World Water Week
Contact us:
Phone: +992 (37) 227-68-43
E-mail: secretariat@dushanbewaterprocess.org